The thermal conductivities for both materials are very similar. Consequently, the savings in energy consumption will be the same in the case of equal thicknesses of insulation boards. Which of the systems to choose? Ceresit PPP on polystyrene foam or Ceresit MB on mineral wool?

Both solutions have their advantages. Both can be used both on newly built houses, and on the operated ones. However, there are differences between polystyrene foam and mineral wool, which can play a crucial role in the choice of system.

Expanded polystyrene is not hygroscopic, respectively, under the influence of moisture does not lose its insulating properties. The periodic occurrence of condensation of water vapor, which may occur through the thickness of polystyrene foam, will not have serious consequences. Despite the fact that it is a polymer, it does not contain harmful substances. Polystyrene foam is very light and has good strength characteristics (tensile strength – about 80 kPa, and compressive strength – about 130 kPa). Tension at 10% compression of polystyrene foam is about 80 kPa. This material is more technological due to such strength characteristics. The disadvantages include low sound insulation properties. Low vapor permeability coefficient: about 12×10-6 g / (m.h.Pa). Temperatures above +80 ° C can destroy polystyrene foam, it is unstable to the effects of most organic solvents. In the system of bonded insulation, you can use polystyrene foam that meets the requirements of DSTU B.V.2.7-8-94 standard. In addition, this material should not spread fire, that is, it must be self-extinguishing, as well as have dimensional stability declared by the manufacturer (after a period of 1.5–2 months). Plates of expanded polystyrene, cut from seasoned blocks should be flat and with a stable size.

Mineral wool plates are resistant to high temperatures. Made from natural rocks, cotton wool fibers begin to melt only after two hours exposure to temperatures> 1000 ° C. The situation with the thermal stability of binders and water repellents is worse, but, in any case, the mineral wool board is considered non-combustible material. They are also resistant to most chemicals. The coefficient of vapor permeability is quite high and is approximately 480×10-6 g / (m.h.Pa). It provides free penetration of water vapor. Already mentioned water repellents reduce capillary water absorption and saturation of the plate with moisture contained in the air. Mineral wool slabs are significantly heavier than polystyrene, have low rigidity and relatively low strength. At 10% compression, the voltage is 30–40 kPa. However, due to its fibrous structure, the plates have good sound insulation properties. There is no Ukrainian standard for mineral wool plates used in facade insulation systems, and the requirements for such materials are usually formulated in the technical specifications for the systems. In the method of “bonded insulation” uses two types of plates. The first type is cotton wool with random arrangement of a fiber (specific weight – 120–160 kg / m3, tensile strength in the direction perpendicular to the surface of the plates,> 10 kPa), the length of the plates is 100–120 cm, and width – 50–60 cm. The second type is plates with the arrangement of fibers perpendicular to the wall plane, so-called lamella (similar parameters: 80–120 kg / m3 and> 80 kPa), and the dimensions of the plates are mainly 120 x 20 cm.

When choosing a building insulation system using “bonded thermal insulation”, fire safety plays a decisive role. In the case of insulation of high-rise buildings (above 25 m), buildings of an increased category of danger to people (for example, hospitals, schools, auditoriums, etc., public facilities), as well as warehouses of combustible materials, it is better to use the Ceresit MB system. High vapor permeability minpity provides quick removal of moisture, for example, the drying of the base with high humidity. Consequently, the Ceresit MB system is recommended for objects with increased operational humidity (for example, kitchens of catering establishments, laundries, water purification stations, car washes, baths, etc.), provided that the corresponding vapor barrier is provided from the room side.

Despite the fact that the walls of rooms operated in wet conditions are most often lined with ceramic tiles, this may not be enough, so the selection of materials for these purposes requires an analysis of temperature and humidity processes. Mineral wool plates are effective for buildings located in places with high noise level. Plates of lamellar wool, convenient and easily modifiable, are ideal for homes with a curvilinear contour.

The Ceresit PPS system is most often used for house insulation and in individual building. This is a consequence of economic prerequisites. Minplita is about 2.5 times more expensive than expanded polystyrene. Almost ten times more lightweight polystyrene foam is more advantageous for transportation and storage in the warehouse. Cheaper is also an additional mechanical mount. Polystyrene plates are much more technological, there are no problems with their cutting and grinding. Small particles of expanded polystyrene, unlike cotton wool fibers, do not cause irritation of the skin and mucous membranes of the face in those who perform work on insulation. All this leads to the fact that labor costs when using the Ceresit MB system is at least 20–30% higher. It should be noted that during the last 15–25 years, expanded polystyrene plates were used more (mineral wool was used for a much shorter period of time). It is important to note that for all this period there have been no cases of fire spreading through wall insulation systems using the “bonded insulation” method. In the case of the choice of polystyrene foam, there is no risk that the wall structure may be overloaded. One m2 of the Ceresit PPS system with 10 cm plate thickness does not weigh more than 11–15 kg. And a similar volume of the Ceresit MB system with a minplate of the same thickness is already over 30 kg. Therefore, using minplita for insulating multilayer walls, the need for anchoring to the construction layer with longer connecting elements should be taken into account. In this regard, currently, depending on the country, up to 70–80% of building insulation works are performed using expanded polystyrene. In the near future, this proportion may change somewhat due to an increase in proposals for miniplits and, accordingly, growing competition among their manufacturers.

Material taken from the site www.ceresit.ua

Send us an application with photos of the object in Viber to number 066-555-44-33  and we will immediately call you back.
Tell about us

If you liked the material read - put it, help us to become better!
Featured Articles 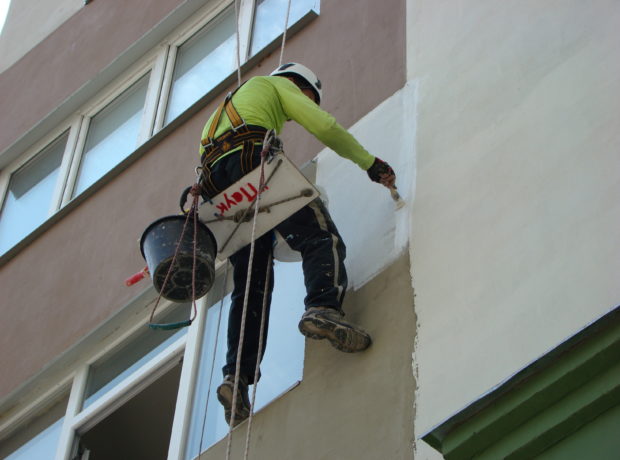