CLEANING THE ROOF FROM SNOW 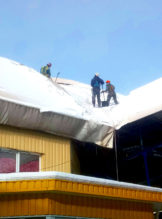 Snow removal from the roof

We had a big task – to clear 8000 sq. M of snow. tent roof. The winters were very rich in precipitation and in the 2016-2017, 2017-2018 winter seasons there was a lot of snow. Some of the roofs were loaded so that the metal structures were deformed and destroyed under them.

In one of the emergency exits we had to cut the awning, under which the supporting structure was bent. Then we worked from 18:00 to 23:30.

There were a couple of cases when the structures were completely destroyed, which resulted in damage to property. Fortunately, none of the people was hurt.

The awning roof is not intended for free movement on it. It is necessary to carry out insurance on such roofs in a special way, fixing a safety line at two ends. On tents with a height of 12 meters, one had to use tricks to climb and organize insurance. For this, we used arboristic techniques – we threw a thin rope attached to a ball, in order to then stretch a safety rope.

Such a cleaning was particularly dangerous in that under excessive snow loads, awnings that have reached the end of their service life were torn. Under the worker opened support space. The specificity of the work was such that such gaps could not be completely avoided. However, we have always tried to keep the awning. Therefore, only experienced climbers worked at this facility, strictly observing labor protection rules.

Since the snow cover has the properties to thicken and turn into a “crust” – a thin ice crust – cleaning the snow often turned into a breakdown of ice blocks. In places of snow drifts the thickness of the snow layer reached one and a half meters.

On the awning roofs of the shopping center “Barabashovo” several dozen snow shovels were destroyed before we picked up a strong and lightweight tool.

If you liked the material read - put it, help us to become better!
Work on cleaning the roof from snow and removing ice. Photos. TC "Barabashovo". | СК Паук